Lt. Michael Murphy (Taylor Kitsch): "Marcus, you are never out of the fight."

Every year on Memorial Day weekend, CrossFitters across the world perform the Hero workout, ‘Murph’. It is a workout that has become synonymous with CrossFit, not just for its brutal toughness, but for what it represents. ‘Murph’ is not simply another workout we do in a class to increase our fitness before moving on to whatever else we have going on in the day. It is a workout designed to honor and remember the men and women of the armed forces that have lost their lives in defense of our freedom. And as is the case with every Hero workout, it has a story of courage and sacrifice behind it.
‘Murph’ is named after Navy Lieutenant Michael Murphy, who was killed in action in Afghanistan June 28th, 2005. 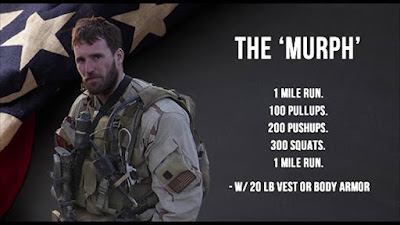