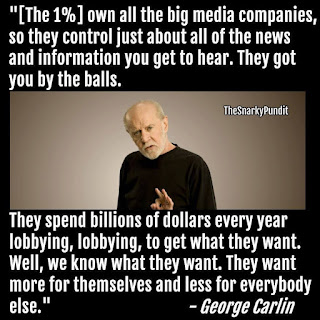 George Carlin: "There's a reason for this... It will never be fixed.... because the owner's of this country don't want that. I'm talking about the real owners, now. The real owners: the big wealthy business interests that control things and make all the decisions. Forget the politicians.The politicians were put there to make you think you have freedom of choice. YOU DON'T.....you have owners. They own you! They own everything! They own all the important land.They own and control all of the corporations. They've long since bought and paid for the congress the senate, the state houses, the city halls - they got the judges in their back pockets and they own all the big media companies, so they control just about all of the news and information you hear They got you by the balls! They spend billions of dollars every year lobbying to get what they want. Well, we know what they want. They want more for themselves and less for everyone else but I'll tell you what they don't want. They don't want a population of citizens capable of critical thinking. They're not interested in that - it's against their interests. They don't want people smart enough to sit around the kitchen table to figure out how badly they're getting fucked, by a system that threw them overboard 30 fucking years ago. ....They want obedient workers ...... It's a big club and you ain't in it. You and I are not in the big club.....The table is tilted, folks. The game is rigged and nobody seems to notice, nobody seems to care. That's what the owners count on....."